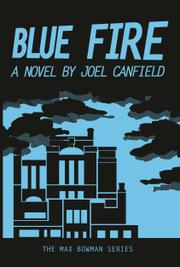 When Max took down the secret military operation Dark Sky last year, it made him a media darling, and he now has a book about his experience in the works. He also has his next gig lined up: comic book publisher “Mighty Mel” Chesler wants him to track down writer/artist Ben Mikov, whose whereabouts have been unknown for decades. Mikov abandoned the industry just before his 12-issue Blue Fire series ended, and the fan-abhorred issue #12 was completed without him; despite this, the series eventually earned cult status. Mel needs Mikov to sign off on a Blue Fire film adaptation, but finding him isn’t easy. Even Max’s CIA frenemy, Howard Klein, turns up nothing. Before Max quits, though, he has drinks with Mel’s grandnieces, Candy and Janine, who plead with him to stay on the case. At the restaurant, the PI is suddenly woozy, apparently drugged, and his ensuing bad trip, recorded by witnesses, later goes viral. This, coupled with the unexplained disappearance of Sen. Abe Marks, Max’s ally during “the Dark Sky thing,” makes him surmise that he’s experiencing blowback from that operation. Someone’s trying to discredit him, he thinks, and this is seemingly verified when he’s dosed again, abducted, and tortured. In this second appearance, Canfield makes Max almost playfully buoyant, which contrasts nicely with the dense, though never confusing, plot. The cynical Max remains optimistic, even when his situation’s dire; despite the fact that numerous people are clearly against him, he still plans on keeping his “dental appointment next Tuesday.” Max’s volatile relationship with his estranged girlfriend, Jules, is efficacious when he has nowhere else to turn to for help. But the best interactions are between Max and Eydie, his new rescue dog, whom he reluctantly grows to love. Mikov’s location does play a part in the story, but the real mystery lies in who the baddies are and how deep their machinations run. Hefty twists abound, including a couple that Canfield saves for the final 10 pages.

A complex tale with an upbeat detective who valiantly confronts a bevy of villains.

THE PROMISE
by Robert Crais
Mystery