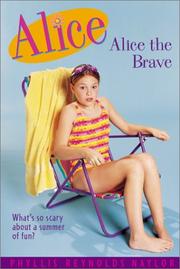 From the Alice McKinley series, volume 10

Following Naylor's six earlier books about this heroine (Alice In Between, 1994, etc.), this installment finds Alice and friends Pamela and Elizabeth on the eve of eighth grade, and smoothly chronicles their twelfth summer. It's a summer of guilty secrets and secret fears. Unknown to anyone, Alice (whose swimmer mother died of leukemia) is terrified of deep water; more than drowning, she dreads looking weird to the boys who hang around Mark's pool. Unknown to Mark, Pamela plans to dump him; and unknown to her parents, Elizabeth has borrowed their Arabian Nights, piquing everyone's interest in "Yemeni wrigglings" and "Abyssinian sobbings." In the course of the summer Alice's Dad dates but doesn't get engaged to English teacher Miss Summers; her brother Lester doesn't choose between his two girlfriends; and, in spite of an ominous chain letter, nothing bad happens to anyone. With a swimming lesson from Lester, Alice conquers her pool phobia in a single afternoon and resolves not to get stuck in life's shallow end. Elizabeth starts making up for lost time with the boy who dumped her because she wouldn't kiss him; and Pamela starts wearing deodorant, the subject of a whole chapter entitled "Armpits." Fans of the series or those undergoing their own suburban teen angst will not be disappointed; others will find Alice unchallenging. (Fiction. 10-14)