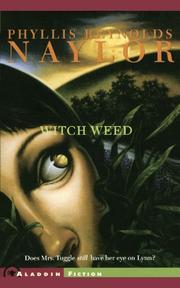 In the fifth installment of this reliably chilling series, Lynn continues to fight the evil Mrs. Tuggle, who is now embodied in a pernicious plant. After the burning of the witch's house and the casting away of her evil eye, Lynn and her best friend Mouse anticipate a soothing summer—even though Mouse is worried about visiting her mother, who has left her family to move out of state. When Lynn begins to smell a hauntingly familiar odor emanating from plants near the creek where the eye was thrown, and even when some acquaintances behave as if they have begun a coven, she is resistant to the prospect of another battle with evil. But when the coven uses Mouse's desire for her mother's return to enlist her cooperation, Lynn knows that it's a fight she can't afford to lose. While many of Naylor's other books are written with more wit and attention to character, this series has its own strengths: suspense, action, and an uncompromising fidelity to the theme. Once again, readers will shiver through the rousing finale and look forward to yet another sequel. (Fiction. 10+)