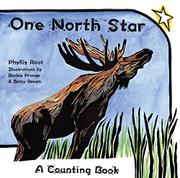 A cumulative tally of flora and fauna in Minnesota—the North Star State.

Bowen’s luminous painted woodcuts, based on designs by Prange, depict 10 northern biomes at sundry times of day and year. The residents of each are different, from an opening aerial glimpse of one moose browsing near a rocky Great Lakes beach followed by two brown bats in a limestone cave beneath one soaring rough-legged hawk to views of 10 teals, nine showy goldenrods, eight milkweed pods, seven Canada geese, and other sights common to a broad tallgrass prairie—all, as the refrain goes, “under one north star.” After a pointed reminder about one final resident—“You live here, too,” showing light-skinned figures at a campfire—Root closes with brief nature notes on the featured plants and animals, plus directions for finding Polaris in the night sky. Despite a patterned format, Root’s not-particularly-rhythmic text isn’t as sonically pleasing as her own Plant a Pocket of Prairie, also illustrated by Bowen (2014), or Donna M. Bateman’s Out on the Prairie, illustrated by Susan Swan (2012), but as befits the various settings, the wild cast is considerably more diverse.

A bright, populous countdown for nature lovers, Midwestern or otherwise.