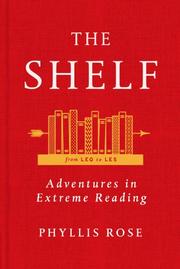 From LEQ to LES: Adventures in Extreme Reading

A year of reading randomly.

In another literary memoir, Rose (The Year of Reading Proust, 1997, etc.) chronicles the year she spent reading 23 works of fiction on a shelf designated LEQ to LES at the New York Society Library in Manhattan’s Upper East Side. Although she had no expectations about the quality of the books on this particular shelf, the project excited her: “[N]no one in the history of the world had read exactly this series of novels,” she writes. It seemed like an adventure in “Extreme Reading. To go where no one had gone before.” She chose the shelf on the basis of a few self-imposed rules: Several authors needed to appear, and only one could have more than five books, of which she would read three; there would be both contemporary and older works; one book needed to be a classic that she had always wanted to read. Describing her project as “organic…like a travel journal,” Rose uses each book to take her down unexpected paths: Reading Nabokov’s translation of Mikhail Lermontov’s A Hero of Our Time (the classic she meant to read) sent her to read several other translations in an effort to connect with a story she found, at first, stilted. Rhoda Lerman’s Call Me Ishtar and several other novels inspired Rose to herself contact Lerman, with whom she felt such an “instant rapport” that the two became friends. Noting that her shelf contained works of only three women, Rose pauses in one chapter to ask about the challenges and preoccupations of women writers. Lisa Lerner’s unsettling science fiction, Just Like Beauty, led Rose to track down the author, who, like Lerman, is now a friend. Using websites and Facebook, Rose experienced “the fun of participating in a virtual conversation about literature at any moment of the day or night.”

Chatty, enthusiastic and at times rambling, Rose is a welcoming guide on her latest journey of literary discovery.