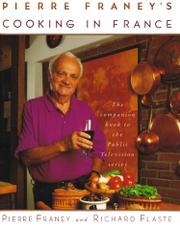 by Pierre Franey with Richard Flaste

French culinary king Franey (A Chef's Tale, p. 189, etc.) teams up with Flaste once again in this companion book to Franey's new 26-week public television series. Amassed here are a selection of classic specialities from each of 20 major gastronomic areas of the country, with information on cheeses, desserts, and drinks and how these ingredients have influenced the development of cuisine in places from Normandy (famous for cream, Calvados, and apple cider) to the Loire Valley (known for freshwater fish like sandre and trout) to Gascony (a major foie gras producer). The authors offer excellent recipes for simple, peasant fare; popular bistro foods; and sophisticated restaurant dishes. Unfortunately, French regional often means lots of meat and cream, and while this makes for great taste in everything tested, from the rich scallops sauteed with leeks and saffron to the hearty sauerkraut with pork, no one can indulge in such heavy meals often. Although there are many lighter recipes in this good cookbook (which will, in all likelihood, become a food bible for Francophiles), it could have been even better with the inclusion of variations for reducing fat. Franey presents easy-to-follow instructions, and even for the most spectacular dishes the preparation is manageable, though often requiring several steps (one of which may be a sauce). Delicious—but just because Franey asserts that the French have avoided current low-fat standards without suffering in ``health or looks'' doesn't mean we all can. (50 photos, 15 in full color, 20 maps, not seen) (First printing 50,000; Book-of-the-Month Club's Homestyle Book Club alternate selection)