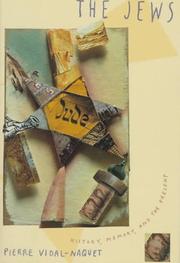 History, Memory, and the Present

A collection of erudite and provocative essays that examine the synthesis of Jewish history and memory. Vidal-Naquet, an eminent French classicist, has a vision of history that is ``strictly antilyrical,'' with Thucydides and Proust representing dueling visions of memory and history. The essays stretch out over two millennia, from the fall of the Second Temple to Baruch Goldstein's Hebron massacre, with threads of zealotry and anti-Hellenism linking the extremities. The author emphasizes the Jewish civil wars of the period, reminding us how the Maccabean revolt against the Assyrian Greeks, too, began with internecine violence. The Qumram zealots who rejected a Hellenized Israel are compared to today's anti-Zionist Neture Karta sect of Hasidim. The collection's focus on memory versus history pits Josephus' practicality against the zealotry of Masada, just as the Warsaw Ghetto's historian, Emmanuel Ringelblum, is set off against its heroic warrior-suicide, Mordecai Anielewicz. If the book battles historical lyricism, it does so with lyrical statements like: ``Between time lost and time rediscovered lies the work of art. The challenge to which [Lanzmann's] Shoah subjects historians lies in the obligation it places on them to be at once scholars and artists.'' Vidal-Naquet lashes into Robert Faurisson's argument that the Holocaust was a Zionist hoax, calling it so much ``intellectual excrement.'' But the historian of classics is on less certain ground in discussing Middle East affairs, with vapid comparisons of the massacres at Deir Yassin and Shatila-Sabra and pronouncements about Jerusalem being an Arab capital. The 42 pages of notes here attest to how well-rounded a scholar Vidal-Naquet is, but the collection leaves one with the feeling that he is a fine Jewish historian—for an authority on ancient Greece.