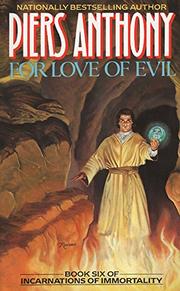 FOR LOVE OF EVIL

Sixth installment in Anthony's popular Incarnations of Immortality series: here, the motives behind Satan's vast and cunning plots in books one through five are revealed. Actually, Satan's not such a bad chap, as we soon learn. He begins life as Parry, a sorcerer's apprentice in medieval France, and marries the lovely and talented Jolie. But then Jolie is murdered by religious fanatics (she persists as a ghost, riding around in a drop of blood on Party's wrist). So Parry becomes a monk, routing out heretics and evil sorcerers, until he's tempted—by Jolie, ironically—to break his oath of celibacy; the lissome demoness Lilah completes his corruption. Eventually, in hell, Parry catches Lucifer by surprise and deposes him. Parry, the new Satan, views his job philosophically—he's winnowing out the unfit souls—and can't abide pointless cruelty. So what is the point of the contest between God and Satan over the fate of human souls? Satan ascends to heaven to consult with God, but the latter is occupied in contemplating his navel. So Satan bargains with Gabriel for the victory (hence all Satan's plots), only to lose everything when he falls in love with another Incarnation, Orb; he destroys himself rather than betray her. All is not lost, however: the new Satan turns out to be such a horror that the other Incarnations conspire to overthrow him and reinstate Parry. One of the most appealing entries so far—Party's about as lovable a Satan as you'll find—with God still to come for the series finale.