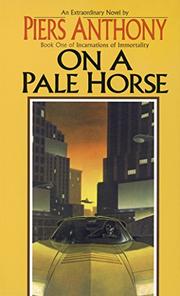 ON A PALE HORSE

The first of another five-book fantasy series from the prolific, YA-ish, popular Anthony—centered on five "Incarnations of Immortality" (Time, War, Fate, Nature, Death) in a messy and illogical science/magic setting. The focus here is on Death, starting with the suicide preparations of guilt-ridden, down-and-out Zane; in comes skeletal Death to claim his soul—but instead Zane shoots Death, and so is obliged to assume the office himself. Zane's ostensible function: to collect and weigh those few dying souls that aren't primarily good or evil, but balanced between the two. But he's really being manipulated by a powerful magician and the other Incarnations. . . who are out to foil Satan, who's hatching a vile plot to start World War III. It's Luna, the magician's comely daughter, in fact, who is fated to stop Satan. And though Satan has therefore arranged for her untimely demise, Zane (having fallen for Luna) refuses to take her soul, going on strike. So Satan abducts the living Luna to hell and threatens to kill Zane. . . but Zane can't collect his own soul: thus, Death has the power to defeat Satan. Rather more seriously intended than most Anthony offerings, with satirical patches and lots of death-ly ruminations: a hardworking but lumpy and not-very-appealing stew—mostly for loyal fans.