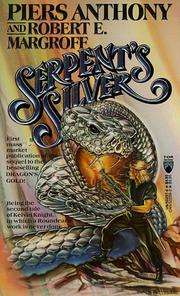 Sequel to Dragon's Gold (not seen), more sponge-brained magical doings involving various nearby "frames" or paralled worlds. Sound familiar? It should—Anthony's been working the same vein for more than two decades. Young Kelvin of Rud—he has round ears, in a world of pointy-earred characters—has fulfilled the first part pf of a hero-prophesy almost by accident. Now he must enter an adjacent frame in order to rescue his Earth-derived father John from the evil, ambitious Rowforth's unpleasant dungeons. In this frame, instead of gold-skinned dragons, they have silver-skinned, rock-chewing giant worms, along with humanoid serpent people—the worms' remote kin—magical types who can freeze humans with a glance. One subplot features Kian, Kelvin's brother, who ends up in the dungeons with John; another involves Kelvin's wife and her obnoxious father. Magic is provided by the vanished travelling sorcerer Mouvar, whose mysterious devices help Kelvin win the day—and fulfill part two of the prophesy. Juvenile gush.