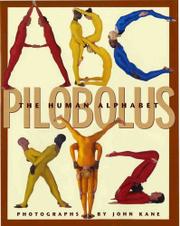 by Pilobolus & illustrated by John Kane

The acclaimed American dance troupe Pilobolus uses their extraordinary talents of balance, flexibility and strength to convey the alphabet. Like most alphabet books, the letters are depicted in upper case accompanied by a noun that begins with that letter, such as B for butterfly. The main difference here is that every letter and its noun is formed by twisting, contorting humans. The letters themselves are unique, sometimes verging on ingenious. It’s the accompanying photos that are extremely difficult. They range from ponderous to impossible. They are all so abstract that the young reader they are meant to instruct, though perhaps amazed at the dancer’s bendablity, cannot possibly puzzle out what the letter stands for. Thankfully, there is a code breaker included—otherwise the mystery, in some cases, might never be cracked. The letter N for nest, for example, is still baffling even after one looks up the answer. While the talent and ingenuity of Pilobolus can be applauded, their efforts will be lost on the intended audience. (alphabet key) (Picture book. 3+)