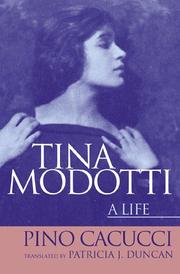 Here’s a blockbuster romance waiting to be filmed: Beautiful, gifted Italian immigrant turns Soviet spy and is loved by Edward Weston, befriended by Diego Rivera and Frieda Kahlo, and, after her mysterious death, mourned by Pablo Neruda. According to Italian writer and journalist Cacucci, Modotti came to the US from Italy in 1913. She was 17, strikingly attractive, and enigmatically compelling to the poet/painter whom she soon married and followed to Los Angeles. Her voluptuous figure gained her femme fatale Hollywood roles, but she abandoned cinema in favor of an intense affair with photographer Weston, who introduced her to the still camera. Modotti and Weston headed for Mexico City, where Tina involved herself in the postrevolutionary artistic and political ferment. In their circle were artists Rivera, Xavier Guerrero, David Siqueiros, and others who influenced her politics and her work. Increasingly sure-footed in her photographs of street life, she “opened the door to social documentary,” according to the author. Nevertheless, her hard-line Communist stance forced her to flee Mexico for Moscow. Giving up photography, Modotti alternated Politburo duties with political espionage, landing in Spain during the Civil War. Reassigned to the US, she was deported to Mexico, where she backed off from the Communist Party, disillusioned by the Hitler/Stalin pact and the first assassination attempt on Trotsky (then in Mexico). She died in 1943 in a taxi, en route home from a dinner party. Was it suicide or assassination? No sure answer. This biography was published in Italy in 1991 and has been translated somewhat stiffly into English by Duncan . More troubling than the stops and starts of the translation are the intermittent “you-are-there” dialogues—between, for instance, Modotti and a Mexican prosecutor, and Modotti and lover Julio Mello. Who was present to record these conversations? A life of mystery, passion, dedication, and talent that begs, “Tell us more.” (16 pages b&w photos, not seen)