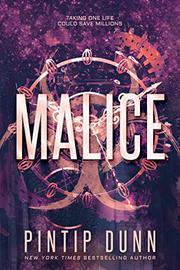 This YA SF novel features a teen who must halt a virus that will kill two-thirds of humanity.

In Silver Oak, Maryland, Alice Sherman is a high school junior enjoying lunch near her campus basketball court. With her is Archie, her brother, a senior and science prodigy who likes equations more than his fellow students. Alice has been Archie’s one true friend since their mother left six years ago. Alice is about to catch up with Lalana Bunyasarn, her best friend, when a sudden “streak of electricity zaps through” her head. The agony intensifies until a Voice enters Alice’s mind, asking her, “Do you want this pain to stop?” The Voice then instructs her to go up to Bandit Sakda, a classmate playing basketball, and say that she loves him. Bandit is a beautiful Thai boy who’s talented and arrogant. Strangely, the Voice calls her Malice and says not to fall for him because “it’ll only make what you have to do later harder.” Eventually, Alice learns that the Voice belongs to someone from 10 years in the future who needs help saving humanity. A virus will be created by a person Alice knows that will wipe out two-thirds of the world population. Following the Voice’s directions can save everyone—except the person Alice is ordered to kill. Dunn’s (Star-Crossed, 2018, etc.) latest YA adventure offers increasingly tantalizing twists that gleam in succession like nested matryoshka dolls. Alice will charm readers with her quirks, especially her devotion to Chris Hemsworth of Marvel’s Avengers films. Tension builds as characters in the large cast, including crushworthy Zeke Cain and the brilliant Cristela Ruiz, become potential targets for Alice’s mission. Details about Thai culture add a splendid dimension to the narrative; for example, Bandit is pronounced “bun-dit” and means “one who is wise.” While the notion of a high school killer may not sit well with some, the author doesn’t use the device lightly. Her book takes a strong anti-bullying stance, doing so through an entertaining narrative that doesn’t resort to preaching. The author’s heart and craftiness make a sequel welcome.