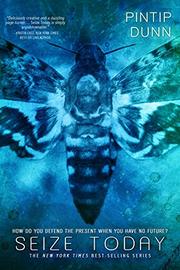 From the Forget Tomorrow series

In this final chapter of a YA sci-fi trilogy, a precognitive teen fights to prevent a genocide—at her mother’s hands—and falls for a boy destined to be her murderer.

Olivia’s not a typical 17-year-old in futuristic North Amerie; that’s the age others see a glimpse of their future. But Olivia, daughter of Chairwoman Dresden, who heads the governing entity, Committee of Agencies, is precognitive. She’s spent a decade in an isolated cabin, building mental walls to block the flood of millions of people’s futures. She can see the various paths individuals may take, including her mother’s potential execution of children receiving mediocre future memories. This is why Jessa Stone is the chairwoman’s personal assistant; she betrayed her family, part of the anti-ComA Underground, to get close to Dresden and stop her. When the Future Memory Agency captures Jessa’s childhood best friend, thoroughly muscled Ryder Russell, agents forcibly extract his future memory, in which he kills Olivia. Regardless, Olivia, aware of Jessa’s plan, is determined to help and aids in Ryder’s escape. Not surprisingly, he has trouble trusting her, as do his loved ones in the Underground. As the teens’ mutual affection grows, however, they ultimately face another threat—a virus that could destroy everyone in the world. As in the preceding books, Dunn’s (Remember Yesterday, 2016, etc.) genuinely romantic scenes are adorned in ardent prose: Olivia’s astonished that she has “such soft feelings for such a hard boy.” But Olivia, like earlier protagonists (including Jessa), is keen and resourceful. She’s especially appealing for overcoming her nickname, Shadow, known as the girl merely observing without taking action. The third entry addresses and expounds on numerous series questions, from insight into what the chairwoman’s been doing (scores of murders and torture) to the origin of Olivia’s ability. Reading the first two novels isn’t a necessity but does enhance the whole experience, particularly with so many returning characters and plot twists that link the entire trilogy.

Savvy writing begets effervescent characters in this futuristic saga, with a gratifying conclusion in every respect.