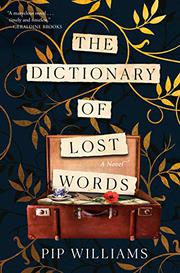 THE DICTIONARY OF LOST WORDS

The Herculean efforts required to assemble the Oxford English Dictionary are retold, this time from a fictionalized, distaff point of view, in Williams’ debut novel.

Esme Nicoll, the motherless young daughter of a lexicographer working in the Scriptorium—in reality, a garden shed in Oxford where a team led by James Murray, one of the OED’s editors, toiled—accompanies her father to work frequently. The rigor and passion with which the project is managed is apparent to the sensitive and curious Esme, as is the fact that the editorial team of men labors under the influence of Victorian-era mores. Esme begins a clandestine operation to rescue words which have been overlooked or intentionally omitted from the epic dictionary. Her childhood undertaking becomes a lifelong endeavor, and her efforts to validate the words which flew under the (not yet invented) radar of the OED gatekeepers gain traction at the same time the women’s suffrage movement fructifies in England. The looming specter of World War I lends tension to Esme’s personal saga while a disparate cast of secondary characters adds pathos and depth. Underlying this panoramic account are lexicographical and philosophical interrogatives: Who owns language, does language reflect or affect, who chooses what is appropriate, why is one meaning worthier than another, what happens when a word mutates in meaning? (For example, the talismanic word first salvaged by Esme, bondmaid, pops up with capricious irregularity and amorphous meaning throughout the lengthy narrative.) Williams provides readers with detailed background and biographical information pointing to extensive research about the OED and its editors, many of whom appear as characters in Esme’s life. The result is a satisfying amalgam of truth and historical fiction.

Who tells your story? Williams illuminates why women needed to be in the room where, and when, it’s written.