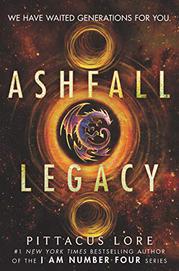 A half alien teenager sets out for the stars in search of his missing dad.

In what rapidly devolves into a jumble of well-worn science-fiction tropes and typecast settings glued together by adolescent behavior and muddy thinking, the story follows 16-year-old Sydney, who has been on the lam with his gun-toting default-White human mom for 10 years. Syd meets and agrees to join his alien uncle on a training voyage to planet Denza, where he can take classes at the local star fleet academy and find his father, who vanished on an exploratory voyage years before. Syd discovers that all humans become super strong and super tough when they leave Earth—but die when they return. Might his father have come upon a cure hidden among the relics of a…wait for it…mysterious race of vanished galactic overlords? In his typically unsubtle way, the pseudonymous Lore chucks discrimination into the mix too—being a “mutt,” as one hostile shipmate put it, Syd gets a decidedly mixed reception from the specist Denzans, and a fellow hybrid angrily informs him that she identifies as human. Before arbitrarily cutting off midway through, the climax collapses into a glutinous mass of revelations including the fate of Syd’s father and the nature of the aforementioned overlords. Oh, and there are space monsters and a magic ring.