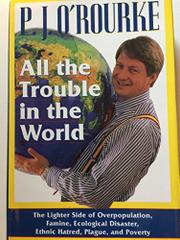 ALL THE TROUBLE IN THE WORLD

The Lighter Side of Overpopulation, Famine, Ecological Disaster, Ethnic Hatred, Plague, and Poverty

Rolling Stone's token Republican and the H.L. Mencken Fellow of the libertarian Cato Institute, O'Rourke (Give War a Chance, 1992, etc.) has written his most sustained and well-argued book yet. O'Rourke touts the glories of free minds and free markets as we currently enjoy them in the US, despite, in his view, the current administration's effort to undermine both. He systematically looks at the issues that supposedly dog our times, combining a glance at the scholarly literature (goofing on academic prose) with fieldwork (getting sauced on five continents). There's lots of typical O'Rourke yuks: the near-libelous name-calling; the international search for good booze and pretty women; and the admitted attacks of ``troglodyte dyspepsia.'' While earnest college kids hug trees and whine about being victims, the rest of the world, in O'Rourke's eye, is determined to get rich. In Bangladesh, he considers the nature of population growth; in Somalia, the course of famine; in the Amazon, the fate of the environment; in the former Yugoslavia, the consequences of multiculturalism; and the roots of poverty in Vietnam. What's behind it all? Politics, says O'Rourke. Often the left-wing sort. In O'Rourke's jaundiced view, the ``moral buttinskis'' of the world continually demonstrate their contempt for the most obvious solution: unfettered capitalism. And he details the wonders of Third World markets by visiting the bustling bazaars of Saigon. What better way to study foreign entrepreneurship than searching for the best bars and restaurants? Only the Somalis, with their intense hatred, really get him down, as do a number of mush-brained environmentalists he schmoozes with at the Earth Summit in Rio. The perfect antidote to revolutionary tourism, O'Rourke's raucous narrative suffers from one conceptual flaw: Like many right-wingers, he forgets that regulation, reform, and butting in led to so many of our current freedoms. (First printing of 150,000; $150,000 ad/promo; author tour)