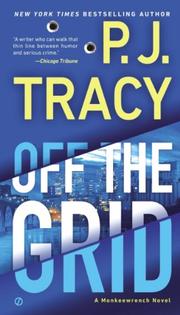 Amazing but true: The Monkeewrench gang, that misfit quartet of lovable cybergeeks who moonlight as the nemesis of Twin Cities serial killers, actually gets upstaged by the Minneapolis Police Department.

Battered, paranoid Monkeewrench founder Grace MacBride’s recuperative sailing trip through the Florida Keys with retired FBI desk-jockey John Smith is rudely interrupted by a pair of killers who climb aboard Smith’s boat and start to cut his throat. Grace handily dispatches them both and rolls the bodies overboard, but she’s seriously rattled to find Smith’s particulars on one of them. Clearly these men weren’t pirates, but assassins who specifically targeted her host. Back in Minneapolis, Ojibwe teen Aimee Sergeant, abducted from Sand Lake Reservation for the sex trade, has her own throat slit when she tries to escape. Ojibwe Officer Bad Heart Bull just happens to be on hand to rescue the four even-younger girls who were snatched with her. In the meantime, even more surprisingly, Joe Hardy, a cancer-ridden Special Ops sharpshooter, executes Aimee’s Somali kidnappers. A sizable stash of weaponry and a remarkably similar murder spree in faraway Culver City confirm Minneapolis PD Detective Leo Magozzi’s hunch that the sale of the kidnapped girls was intended to provide financing for a gang of Somali terrorists who’ve gone after Smith for mysterious reasons that provide the slender mystery’s most pleasing surprise. The rest of the Monkeewrench crew—Annie Belinsky, Harley Davidson and Roadrunner—don’t have much more to do than the abducted Ojibwe girls; for better or worse, this show mostly belongs to Magozzi, his partner, Gino Rolseth, and the imperturbable Smith.

Despite the high body count, Tracy (Shoot to Thrill, 2010, etc.) seems to have taken something off her customary manic formula: The murders are much less florid than usual, and the regulars seem almost subdued.