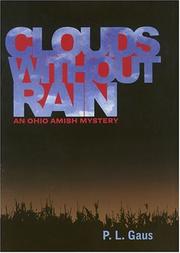 Clouds without rain—people who spread darkness without a compensating benefit—are rare among the Amish of Holmes County, Ohio, where plain-living farmers know the virtues of church, family, and hard work. But John R. Weaver was one such cloud. Under the lenient leadership of Bishop Melvin P. Yoder, Weaver, equipped with a decidedly un-Amish computer and fax machine, grew rich by trading land futures from a secret room in back of his house. Now the new bishop—J.R.’s brother Andy Weaver—together with Pastor Cal Troyer wants to restore the Old Order ways. Before Andy can confront his errant brother, however, John is killed in a spectacular buggy crash, along with a young driver named Brad Smith and deputy sheriff Phil Schrauzer. Worse yet, the day after John’s death, eight families in Bishop Andy’s flock receive letters informing them that the farms rented to them by J.R. in a highly unusual lease-to-own scheme are being repossessed and sold to a firm of Cleveland land developers. To deal with the worldly consequences of this Amish-made disaster, Weaver and Troyer turn to an outsider: their old friend Professor Michael Branden (Broken English, 2000, etc.). But Branden has personal motives for his interest in the case. First, his old friend, sheriff Bruce Robertson, has been gravely injured trying to save his deputy. Second, the injuries to J.R.’s horse tell him that the crash was no accident.

As in his earlier Ohio Amish mysteries, Gaus, a chemist by training, combines drama and bewilderment in just the right proportions.