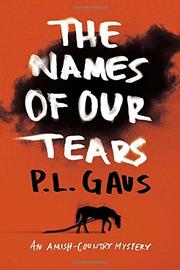 THE NAMES OF OUR TEARS

The shooting of a teenage girl rocks the Amish community of Holmes County, Ohio.

Maybe it isn’t just the fine Coblentz chocolate that sends Mervin Byler on his seventh trip this spring to the widow Stutzman’s shop in Walnut Creek. On his way, he encounters the unimaginable: the body of 19-year-old Ruth Zook, shot through the head and lying beneath the hooves of her terrified horse. Just back from the Amish settlement of Pinecraft, near Sarasota, Ruth has spent the past two days in her room, speaking to no one but Emma Wengerd, the shy, haunted child adopted by the Zooks after her family died in a buggy accident. Sheriff Bruce Robertson (Harmless as Doves, 2011, etc.) is desperate for a lead, but the Zooks close ranks. Even local pastor Cal Troyer fails to reach Emma, who can’t cry and can’t pray, but can only sit wordlessly, too angry at God to speak. When fish start to die from the cocaine Ruth dumped from her suitcase into the Zooks’ pond, Robertson knows that it’s drug dealers he’s looking for. But even when Fannie Helmuth, another Amish girl, confesses that she too brought a suitcase full of drugs back from Pinecraft, he has little to go on. All Fannie knows is that she gave the suitcase to an angry-looking woman with dark hair. Frustrated, the sheriff sends Deputy Ricky Niell to Florida to find Jodie Tapp, the young Mennonite waitress who gave Fannie her suitcase. But even if he finds her, can Jodie help the Holmes County Police identify a murderer over 500 miles away?

Once again, Gaus probes the tension between the self-reliance of the Amish world and the urgencies of the English world with depth and sensitivity.