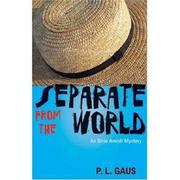 SEPARATE FROM THE WORLD

Two unexplained deaths bring home to history professor Michael Branden (A Prayer for the Night, 2006, etc.) the powers and limitations of modern science.

Change comes even to the Amish. Some of Bishop Andy Miller’s flock out in Calmoutier are helping Professor Lobrelli with her genetic research. Enos Erb, a dwarf, is a “Modern” who believes in gene therapy. Though Enos’s brother Benny, another dwarf, is eager to talk to Lobrelli, he lives with his brother Israel, of normal height and a staunch “Anti.” When Israel finds Benny dead in their store, Enos is perturbed; Benny’s short legs are too stiff to have climbed the ladder he seems to have fallen from. So Enos goes to Lobrelli’s colleague Michael Branden. Before Branden can decide whether to help, he witnesses another death closer to home. In the middle of an antiwar rally led by psychology professor Aidan Newhouse, graduating senior Cathy Billett plunges from the college bell tower. Her boyfriend Eddie Hunt-Myers calls her death suicide, the result of their abrupt breakup. But when Branden realizes that Cathy was Lobrelli’s research assistant, he suspects there’s more to the story. His search for the truth teaches Branden and his friends, Pastor Cal Troyer and Sheriff Bruce Robertson, a lesson in what the Amish call “the most beautiful virtue,” humility.

A perceptive look at problems that have no easy solutions.