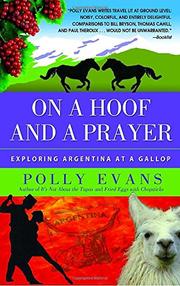 ON A HOOF AND A PRAYER

Exploring Argentina at a Gallop

From the high desert of the northwest to the northeast falls of Iguazú to hyperenergetic Buenos Aires to Patagonia and the “end of the world,” Evans roughed it during two months of solitary travel in this vast country. As a pleasant leitmotif, she cleverly incorporates her youthful desire to learn to ride in a land where horses have played a vital role since the Spanish founder of Buenos Aires, Pedro de Mendoza, abandoned a handful of his steeds to run wild and breed on the pampas in the mid-16th century. Evans journeyed from mid-October to mid-December, during the spring in Argentina. She started with a week’s stay at a breathtaking 6,000-acre cattle estancia in Córdoba owned by an Anglo-Argentine family that arrived in the 1820s as part of a British immigration wave. She rode about the hills, drove through the Puna (the desert shared with Chile and Bolivia) and visited the Salinas Grandes. In breezy, lighthearted prose, she imparts a smattering of Argentine history. Che Guevara grew up near Córdoba, for example, and the economic collapse of 2001 left 15 million Argentines in poverty. Evans traces the conquistadors’ inroads and their decimation of the various native tribes, and relates briefly the movement by criollos (South American-born Spaniards) for independence from Spain in 1816. Darwin arrived in Argentina in 1833, and Evans frequently quotes from his observations. Evita Perón and the return of her corpse warrant a digression, as does the “dirty war” of the 1970s and ’80s that resulted in 30,000 “disappeared.” Along her amiable way, Evans encounters tango and gauchos; she even learns to castrate a calf.

Funny and easygoing, Evans reveals the little-known richness of Argentina.