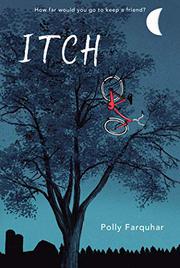 Isaac’s been trying to fit in since moving from New York State to rural Ohio. He’s learned about football, for, despite his engineer parents’ sports apathy, the Ohio State Buckeyes are a religion around this (seemingly predominantly white) town. Isaac even lets his classmates call him Itch, the nickname he earned because of his chronic condition. Isaac has what he calls “the itch” and what the doctors call “idiopathic angioedema.” Sometimes, for no apparent reason, Isaac gets an uncontrollable itch and swells up with massive hives, making his hands “look like raw hamburger meat.” Of course, Isaac’s not the only kid in sixth grade with health troubles. His best friend has life-threatening food allergies, and so does the weird new kid; both need EpiPens. A deft touch with unusual details keeps the narrative from getting bogged down in medical drama: Isaac has an after-school job at a pheasant farm, a preoccupation with the texture of sandwiches, and a lucky peanut shell. Lyrical, pensive prose unexpectedly isn’t a harbinger of tragedy; these kids have regular lives, shaped by their grave health concerns but not overwhelmed by them.