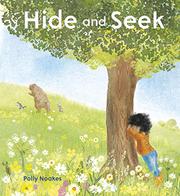 A child and some animal friends play hide-and-seek in a vast meadow filled with wildflowers, where lurking danger becomes a new friend.

The child rides on the back of a large brown bear; their raccoon and rabbit friends run in front, each on their two hind legs. When the child faces a tree and counts to 10 for hide-and-seek, the three animal friends sneak away; readers see the back of a wolf’s head up close, sharing its view of the scene. When the child turns around, calling “Coming…ready or not,” the wolf peeks at them from nearby, while the bear, raccoon, and rabbit hide far away. The child approaches the hiding friends: “I can hear you!”; “I can smell you!” The child just misses spying them each time, always unaware of the nearby wolf, whose face becomes increasingly menacing. Finally, in the sunflower patch, the child gives up and declares that it’s their turn. When the bear, raccoon, and rabbit begin searching, they instead find the wolf, who looks meek when they ask where their friend is. Contrary to readers’ expectations, the group of friends ends up gaining one instead of losing one. Depicting the sole human character with brown skin and free, kinky hair, the illustrations make impressive use of texture and varied perspectives to create depth in the environment. The soft color palette minimizes the potential scariness of the wolf throughout the suspenseful drama.