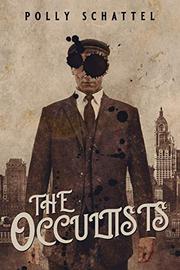 A teenager in the early 20th century enters into a precarious relationship with a cult in this debut dark fantasy.

To avoid working for his abusive stepfather, Max Grahame takes a job at the post office in his small Georgia town. The postmaster, Peter Sylvester, and his wife, Addie, seem to take a liking to the 15-year-old. But Max quickly learns of their eccentricities when they take him to a séance. Peter and Addie belong to the Brotherhood of the Aurora, a spiritualist faction whose members believe in and practice “occult phenomena.” Evidently certain that Max has potential, Peter sends the teen to study at an academy of sorts in Nebraska. Max has little choice but to agree, as local cops are eying him for a recent murder he witnessed. Once in Nebraska, he joins other “initiates” in honing such abilities as mind reading, astral travel, and, in Max’s case, psychokinesis. Sadly, as he had left behind his family, Max longs to return home only to learn that his stay at the school may not be voluntary. Soon, he has no idea whom he can trust, and he’ll have to form alliances with potentially dangerous individuals just to keep himself safe. Schattel wastes little time in establishing a brooding atmosphere. For example, the story offers an early introduction to Mister Splitfoot, a “man-spirit” who torments Max throughout the novel. Indelible prose further augments the environment: “Stale chilly air. The stink of saliva. A clutter of upturned chairs, decayed, crumbling tables and medicinal cabinets.” In the same vein, a host of characters is ambiguous, as Max is never sure what seemingly amiable person will ultimately become a menace. The author adds fantasy trademarks, including displays of paranormal capabilities, sometimes in tense, combative sequences. There are some notably violent scenes, like Max as a “blood boy,” assisting a doctor during a particularly visceral operation.