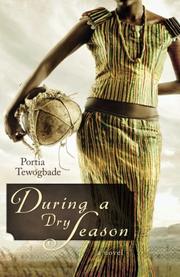 DURING A DRY SEASON

In Tewogbade’s debut novel, Garnett, an African-American woman, immigrates with her husband to his home in Nigeria and struggles with the values of a tribal society.

Garnett was raised by her grandmother in a Brooklyn, N.Y., housing project, and at first glance, her pampered life as the wife of Kayode, a Nigerian banker, seems like a success story. However, her domestic life becomes unsettled when she doesn’t become pregnant. As a result, she faces her husband’s disappointment; her meddling mother-in-law also disapproves and reminds Garnett that she’s “a wife of this family not just my son.” Other dark clouds hover, as well; her husband’s sketchy financial dealings and infidelities add to her teetering self-worth and fear of losing him to a “junior wife.” It may be hard for readers to stomach the low expectations that Garnett has for her marriage, but the author paints the character’s complexities and dichotomies honestly and realistically. Garnett excels in her work as a clothing boutique owner and displays inner strength, but she also feels that her present reality may one day be stolen away—and in the end, she’s right. She eventually stands up to her husband but at a great cost; when Kayode forbids Garnett from leaving the country, she draws on the survival methods of her childhood to quickly develop a plan. Tewogbade portrays Nigerian culture and Garnett’s daily life in flowery, metaphorical prose, and at times, the narrative overuses foreshadowing, which often deflates the tension. That said, Tewogbade provides a rare window into how women live in a society where they’re considered the property of their husbands. It’s refreshing to see even a fictional story of an African-American woman’s experience in Africa; many of Garnett’s Brooklyn friends romanticize the continent as the motherland, but she discovers that it brings her none of the comforts of home.

A novel that offers an original, compelling facet of the African-American female experience.