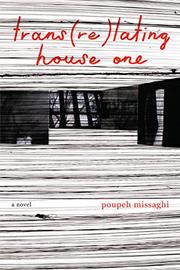 The narrative is fragmentary, deliberately disjointed, because, as the unnamed narrator explains, "the whole only becomes the whole in parts, in conversation with the parts, dispersed in time, in space." It is a novel filled with unanswerable questions: "How can we free ourselves from the past while honoring it?" "How does death define the experience of life?" "Can the living even have a narrative without the narratives of the dead?" The book begins with a woman's search for public statues that went missing in the spring of 2010, in the wake of Iran's political unrest. The pieces are numbered and described as though in a catalog: "Missing Statue (1): Mother and Child. Location: San'at Square." Interspersed with the statues and the story of her search for them are pages of questions, word clouds, and quotations from academic works on the subjects of dreams and urban spaces, and the tone ranges everywhere from journalistic to magical realist. Another set of numbers begins, this one a catalog of corpses. "I make her keep looking for the bronze bodies while these bodies of flesh and blood begin to become their own statues in the landscape of my soul," the narrator tells us. The dead described here are based on real cases, and what connects them is the violence of the state: assassinations, arrests by Cyber Police, attacks on university students, beatings in prison. In Persian, "both 'testimony' and 'martyrdom' are expressed with one word." We learn the cause of each death, the date and place, and the attempts by those left behind to learn the truth, to seek justice, to mourn. "What is the use of the book when the dead are not coming back to life?" "What good is yet another remnant?" "Will the trauma ever stop being inherited? Will humans ever change?"

An ambitious, important book, erudite and anguished, about the role of writer as witness.