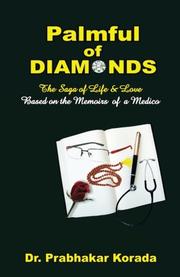 The Saga of Life & Love, Based on the Memoirs of a Medico
by Prabhakar Korada
See author's Pro Connect page >
BUY NOW FROM
AMAZON
BARNES & NOBLE
LOCAL BOOKSELLER
GET WEEKLY BOOK RECOMMENDATIONS:

This epic work, in the vein of Vikram Seth’s 1993 novel A Suitable Boy, shares that book’s theme of striving to find an appropriate spouse. It opens in 2006 with Dr. Surya Rao preparing for the opening of SURYA Hospitals, which offer affordable, holistic psychiatric treatment. He’s a professional success but also carries a personal sadness with him. When Lakshmi Beliappa turns up to the opening ceremony with an unfinished painting by her grown daughter, Sindhuri, Surya is plunged into his own memories. He met Sindhuri, a budding fashion designer, eight years before when she accidentally kicked him in the face in a swimming pool. They became close friends through their shared interests in swimming, karate, and meditation, but Surya resisted his romantic feelings, reasoning that he was too old for her: “my love for her…was truly non-possessive, truly platonic,” he told himself. Instead, he encouraged her to accept one of her parents’ chosen suitors, but none were satisfactory, and one even assaulted her. After Sindhuri’s father’s sudden death, Surya finally changed his tune and proposed to her. Their marriage of true equals was ultimately cut short, but Surya’s philosophical approach to life and death allowed him to make it through: “I am with you through this, Sindhuri….It hurts me as much as it hurts you,” he says. This tragic romance plotline distinguishes the novel, which, despite its excessive length, gallops along fairly well. Religious concepts, such as karma and ahimsa, are unobtrusively discussed along the way, and moments from Indian history and Surya’s activist past are introduced through further flashbacks. There are occasional flashes of poetic language, such as “the sun…appeared like a ball of saffron in the distant horizon.” However, there are persistent problems with misused or missing prepositions and articles (as in “the art to defend ourselves,” “I was at loss for words,” and “She screamed on top of her voice”).

THE MINISTRY OF UTMOST HAPPINESS
by Arundhati Roy
Indie

The Door Had Never Been Locked
by Leo Grieben
Fiction