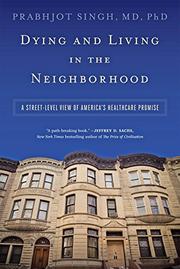 DYING AND LIVING IN THE NEIGHBORHOOD

A well-intended but imperfectly constructed argument for community-based health care by a physician-turned–medical activist.

The Affordable Care Act of 2010, or Obamacare in shorthand, is a frequent target for the corporate right, offended at the thought that medicine should not be the profit center that, say, oil and copper afford. It is less often criticized by the left, which lends Singh’s (Arnhold Global Health Center, Mount Sinai) critique an interesting cry-in-the-wilderness quality. The author works from a by-now-quaint notion that the physician is the advocate for the patient and, more, that a doctor is a kind of “natural attorney for the poor.” In this advocacy, the physician must leverage existing networks not of insurers but of friends, neighbors, and family. Obesity, for instance, is a widespread problem everywhere in the United States but especially in poor neighborhoods, where nutrition is indifferent and healthy food not easily accessible. In such an instance, promoting good health practices to any effective measure involves remaking the community as much as the individual. Singh’s arguments against a health care regime “imbalanced in favor of technocrats and captains of industry” are very well-placed, as is his critique of ACA for, among other things, not including communities in health care planning or considering the neighborhood as a natural political unit; no one is better positioned to advance these arguments. Yet he is long in the diagnosis and short in the healing. While he states in many ways the basic notion that neighborhoods need to be engaged in health care, that community-based medicine needs to be made a priority, he is less cogent in advancing specific ways in which we can move toward “total population health,” as one of his chapter titles puts it, and shift medicine away from its current corporatized model.