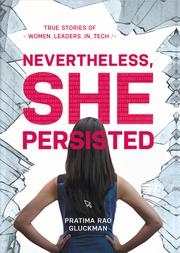 A collection of interviews with female leaders in the high-tech industry discussing their experiences with gender bias.

After she was introduced to programming at 14 years old, debut author Rao Gluckman enthusiastically decided she wanted to become an engineer. She didn’t, however, anticipate the gender bias she would encounter when she pursued a position in management and joined the ranks of leadership. She sought out role models and mentorship among other women in positions of authority within the high-tech field, a strategy she became convinced could be helpful to other women as well. Consequently, Rao Gluckman, who currently manages a team of software engineers at a computer software company, spoke with accomplished female executives about their encounters with bias, their influences and inspirations, and their strategies for success, and she compiles 19 of those interviews here. The topics range widely—institutional bias, compensation, and the difficulty balancing the demands of work and family. One theme is the “imposter syndrome,” the discomfiting feeling of self-doubt even some of the savviest women suffer in a male-dominated industry. There are also incisive discussions of the illusion of meritocracy, a myth undermined by the ubiquity of bias. International perspectives are represented as well. Yanbing Li, a senior vice president and general manager, notes that there is much less bias in STEM fields in China. Each interview is prefaced by a “biosketch,” a brief synopsis of the subject’s experience and perspective, and ends with bulleted “takeways,” brief summaries of the exchange’s chief points. The author is a perspicacious interviewer and skillfully extracts illuminating insights and fresh perspectives from her subjects. For example, Alaina Percival, CEO and board chair for Women Who Code, observes that undercompensating women ultimately hurts companies that are unable to retain top talent as a result. The author’s prose can lazily default to clichés: Phrases like “and the world becomes your oyster” undermine the genuine insights shared. Also, some of Rao Gluckman’s own counsel is vague and overly general; her solution to the imposter syndrome problem: “By tackling it head on, becoming disciplined, and learning more about the area we are insecure about.”