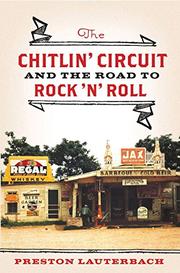 THE CHITLIN' CIRCUIT AND THE ROAD TO ROCK 'N' ROLL

The development of the Southern black club scene receives a sometimes cluttered history.

In his debut, music journalist Lauterbach plots the early years of the chitlin’ circuit, which takes its name from “chitterlings,” or hog intestines, an indigenous Southern cuisine. Born in the late swing era, the circuit owed its existence to canny entrepreneurs like Denver Ferguson, a numbers racketeer and club owner in Indianapolis’ “Bronzeville” district, and Walter Barnes, a self-promoting bandleader and Chicago Defender columnist who barnstormed black markets in the South. Their efforts opened the way for other regional bookers like Don Robey (Houston), Sunbeam Mitchell (Memphis) and Clint Branley (Macon). The chitlin’ circuit gained traction during the 1940s, as the big bands waned and small combos like Louis Jordan’s Tympany Five set the stage for popular R&B acts like Roy Brown, Johnny Ace, Little Richard and James Brown. Frequently citing the black press of the day, Lauterbach tells his story with big splashes of color. At times, the narrative slows as the author trots out endless band itineraries. Possibly the biggest problem with the book is Lauterbach’s failure to make a completely compelling case for Ferguson’s enduring importance. He devotes most of his space to the Indiana promoter’s hometown business, and material about Ferguson’s later years, in which he grappled with tax troubles and a messy divorce, add little to the main narrative. Furthermore, Lauterbach ends the story with the arrival of the ’50s performers who gained fame in the rock ’n’ roll era (and a pointless coda about the destruction of Memphis’ Beale Street district). While he alludes to the colorful careers of modern chitlin’ circuit artists like Bobby Rush and the late Marvin Sease, whose popularity extended into the new millennium, he leaves that vital story untold. A lack of organizational rigor derails an interesting tale.