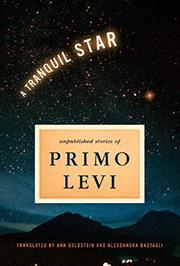 Universal mysteries and the legacy of world war are imaginatively transfigured in this beguiling collection of the late (1919–87) Italian polymath’s short fiction.

The book gathers 17 stories published between 1949 and 1986 that reflect the author’s humanist viewpoint and the range of interests displayed in such classic works as The Periodic Table and Report from Auschwitz. Both the war in which Levi unhappily served and the Holocaust he survived are fictionalized in a terse vignette about an Italian partisan who finds a way to “resist” his German captors (“The Death of Marinese”) and a troubling parable (“One Night”) in which an orgy of destruction is perpetrated by “little people” who appear seemingly from nowhere. Elsewhere, unforeseen complications lurk in the innovation of a sleekly packaged killing device (“Knall”) and in the experience of workers in a paint factory (Levi himself was one) where a mixture “that provided protection from misfortune” is created (in “The Magic Paint”). Presumptions of social control are calmly skewered in an understated account of a public spectacle that offers commuted sentences to prisoners who perform as “Gladiators” combating cars, and in the tale of a nondescript clerk entrusted with recording—and arranging—other people’s deaths. There’s a hint of Borges in the description of a lavish fantasyland populated by famous literary characters (featuring such promising pairings as the Marquis de Sade’s Justine with Dracula), and one of Calvino in a fable of social unease as experienced by a kangaroo invited to a lavish “Buffet Dinner.” And the relationships between scientists’ discoveries and their own flawed perspectives and powers are brilliantly conveyed in a wry tale of embattled ethnographers in the Bolivian jungle (“The Sorcerers”) and in the radiant title story, about a fluid celestial entity that mysteriously resists both predictability and classification.

The infinite and the ineffable, portrayed with singular wit and charm.