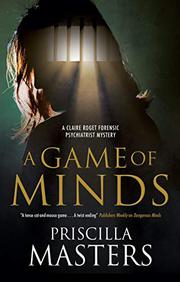 A GAME OF MINDS

A forensic psychiatrist juggles two cases while dealing with turmoil in her own life.

Even though it's been over a year since her boyfriend, Grant, walked out, Claire Roget attends the funeral of his sister, who died from cystic fibrosis. As she's leaving, she gets a phone call from DS Zed Willard, who begs her to help a dying man whose daughter vanished six years ago find closure. The police have always thought 14-year-old Marvel Trustrom was a victim of serial killer Jonah Kobi, who admitted to killing four schoolgirls in the potteries area of England but not Marvel. After looking over the case files, Claire agrees to interview Kobi, a former schoolteacher, thus kicking off a cat-and-mouse game of hints and denials. Since Kobi’s already serving a life sentence, Claire has no obvious way of influencing him. She finds him clever, annoying, and possibly innocent of Marvel’s presumed death. In the meantime, Grant is working to renew their relationship, but Claire has had trust issues ever since her father deserted the family and her mother, happily remarried, continued to blame Claire. She’s also worried about Ilsa Robinson, one of her patients at the psychiatric hospital who’s a Danish beauty whose wealthy husband seems to be afraid of her. Ilsa wants to return home to her young son but claims her husband is having an affair with her best friend. Pressured to release her, Claire is conflicted about the wisdom of the decision. Every meeting with Kobi gets her deeper into a case that’s finally resolved with explosive results.

A page-turner that keeps you reading, with well-drawn characters who make it a pleasure.