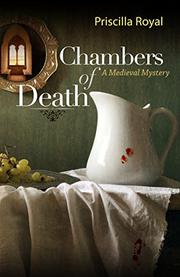 Lust and other deadly medieval sins.

Away from Tyndal, Prioress Eleanor and Brother Thomas feel lucky to find shelter at a manor, as one of their traveling companions has taken gravely ill. Eleanor is happy to place the ailing girl into the hands of Maud, a physician’s widow with some knowledge of healing, but their stay is not to be peaceful. Master Stevyn, the manor’s widowed steward, has a much younger new wife, Luce, who is putting horns on his head with the help of Tobye, the groom. No wonder Stevyn’s older son Ranulf and his wife Constance see sin everywhere. Huet, the steward’s younger son, has recently displeased his father by giving up a place at university. When Tobye is murdered, the ambitious sheriff insists the killer must be the cook who had eyed Tobye with lust. The sheriff insults Prioress Eleanor with his discourtesy, and his rude refusal to consider other suspects prompts her to question people on her own. When Luce is found hanged, the deductions of Eleanor and Thomas prevent the sheriff from calling it a suicide. Eleanor, who is constantly fighting the lust she feels for her companion, has greater insight into the crime than a nun might be expected to have, but it’s a difficult and dangerous job to winkle out the murderer.

The sixth of Royal’s historical mysteries (Forsaken Soul, 2008, etc.) proceeds as slowly as the Middle Ages, but it keeps you guessing.