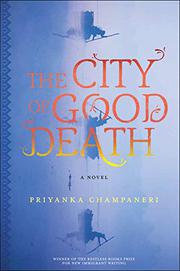 THE CITY OF GOOD DEATH

Ghosts haunt the living in a holy Hindu city.

This debut novel is set in Kashi, on the banks of the Ganges. Believers say that those who die in Kashi experience a “good death,” meaning they die once and for all, with no reincarnation. Pilgrims come from far and wide hoping to spend their last days in one of Kashi’s designated death hostels, one of which is managed by a man named Pramesh. Pramesh grew up outside of Kashi with an alcoholic and abusive father and uncle and a cousin who resembled him so closely they passed as twins. As Champaneri’s novel begins, Pramesh’s cousin, Sagar, suddenly shows up in Kashi, having died under mysterious circumstances. Then his ghost begins to haunt Pramesh’s hostel—the washroom, specifically—with an earth-shattering racket, and nothing that anyone does seems to have any effect. What Sagar’s ghost wants is just one of the mysteries of this somewhat overstuffed book. Champaneri’s Kashi is teeming and vivid, but her prose can sometimes feel overdone. The story sags in places. Most interesting are the flashbacks to Pramesh and Sagar’s childhood, but these moments often feel rushed. It’s possible that Champaneri is trying to fit in too much. A subplot involving yet another ghost—this one a young woman’s—is compelling but never quite coheres with the novel’s main action. Still, the book frequently charms, and it's as full of humor, warmth, and mystery as Kashi’s own marketplace.

Uneven but charming, Champaneri’s debut intrigues even as the writing occasionally sags.