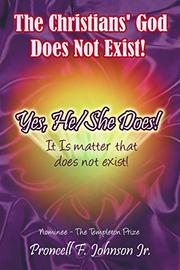 THE CHRISTIANS’ GOD DOES NOT EXIST!

Yes, He/She Does! It Is matter that does not exist!

Advanced physics confirms that the world is a purely spiritual emanation of God, according to this treatise on the doctrine of Christian Science.

Debut author Johnson bases his arguments on the philosophy of Mary Baker Eddy, founder of the Church of Christ, Scientist, who taught that the universe is an entirely spiritual and good creation of God’s infinite mind and that material reality and suffering are illusions. Her most distinctive teaching rejected conventional medicine in favor of healing through prayer and reflection on the nonexistence of disease. Drawing on the writings of scientists and thinkers from Albert Einstein to evolutionary theorist Richard Dawkins, along with reams of biblical citations, Johnson contends that scientific findings on the nature of matter support Eddy’s ideas. He notes that the theory of relativity considers matter and energy equivalent; that quantum mechanics regards matter as both a particle and a wave or even as a disembodied probability; and that atoms are up to 99.9999 percent empty space with a wisp of corporeal substance. He concludes that people’s experiences of reality and matter cannot proceed from atoms, which are “tiny, un-alive vibrating balls,” and must therefore be a dream that they conjure as entities created in God’s image. Sprinkled into the theorizing is the author’s critique of modern health care, along with his personal reports of the seemingly miraculous results of Christian Science, from the alleviation of intestinal ailments to his success in finding his wife’s lost earring. The final fourth of the lengthy tome delivers an appendix containing Johnson’s essays and speeches, which constitute a Christian Science catechism covering such topics as “Is Baptism Essential for Salvation? No and Yes” and “Are We Christians Really Sinners? Absolutely Not!” Johnson’s sprawling treatise offers some intriguing observations on the weirdness of modern physics—especially the more mystical interpretations of quantum physics—in a lucid and engaging style. Unfortunately, his own theories are murky and full of gaps. He nowhere develops them in a systematic, linear fashion; instead, he keeps circling back to a few suggestive but not dispositive riffs on the blurriness, emptiness, and evanescence of matter. (His introduction acknowledges that the book’s “repetitions may cause confusion and even boredom” and advises readers to browse rather than perusing it cover to cover.) Johnson’s arguments are seldom compelling or even coherent. One section juxtaposes diagrams of atoms with pictures of big things—a mountain, a house, a man—to suggest that people see the latter because of “the ‘mist’ described in” Genesis. Others proceed by incantation rather than reasoning (“What we think we see and observe is only illusion imposed upon the ever-present atom by the so-called carnal mind….it is illusion upon illusion upon illusion because the so-called observer is also an illusion who seems to be viewing a materialized illusion in the form of atoms transformed into so-called material objects”). Christian Scientists and others attracted to mind-over-matter ideology may feel inspired by the work’s assurances that a brute, intractable reality of pain, illness, and death can be brushed off like a bad dream. Readers who value secular science may not be persuaded.

A rambling religious primer with a veneer of pop physics.