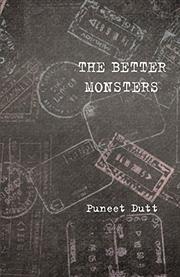 A complex work of poetry about seeking one’s rightful place in the world.

Poets have long used the topics of arrival and departure to explore feelings of belonging. In this debut book, Dutt gives us a glimpse into what a foreigner’s arrival to the United States looks like: “how to then shed this skin / wrapped since youth / how to speak American / when we arrive / without our imagination / to bring down bodies.” This sense of displacement festers in this book, which effectively presents a portrait of a family lost between two cultures and two generations: “We can’t talk / about what we did how sometimes it’s different / from the way it’s shown but they think they know / and we can’t tell them we can’t even tell each / other.” The family systematically struggles with preconceived notions that some Americans have about the Indian population. This subject matter is nothing new, especially in the modern era, but thankfully, Dutt’s collection is a productive contribution to a conversation about inclusion and tolerance and not a rehashing of stereotypical attitudes. Despite the tumult of arrival in a new place, daily life is shown to function as prosaically as it did before. In “Over Cider and Whiskey in Hotel Rooms,” the speaker compares the generational gap that exists between her and a figure who appears to be her son. The poem builds as the stakes get higher, though it ends on a small instance of everyday life: “we’d be so annoyed / when someone would slap the car / to pass and cross // we’d all have to get out / and check.” It’s these moments, when the poems seep through the speaker’s humanism, that make the collection so gripping. And at times, Dutt takes readers by surprise with tragically poetic stanzas: “all those stones / go home to your country / my country? / where we are on any map.”

An exciting poetic work that lives up to its emotional and linguistic potential.