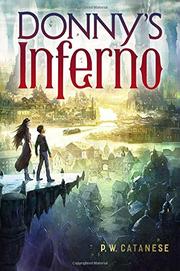 From the Donny's Inferno series, volume 1

Rescued by an archdemon, the son of a professional hitman helps keep the underworld a more humane place.

After Angela Obscura, in the form of a beautiful girl, saves Donny Taylor from the burning building where he’d hidden after discovering his father’s real job, the archdemon takes him to her world—these days, they call it Sulfur—where he helps her foil a counter-revolution. In Catanese’s exploration of good and evil, the demons of Hades have replaced the never-ending torment of eternal fire with indefinite stints in the Caverns of Woe, where damned souls may have the possibility of redemption. A lengthy setup introduces a variety of curious characters and the underworld, a place of bizarre, volcanic rock formations, where political rivalries smolder, as exemplified by the opposing opinions of Angela’s two-headed friend, Zig-Zag. Donny arrives just in time for the culmination of a conspiracy to restore the Pit of Fire, through the dramatic destruction of the Council Dome. When the action heats up, there are fears and fires of all kinds. Careful plotting prepares attentive readers for the 12-year-old’s last-minute rescue, and there’s ample room for a sequel. But the author lovingly details the characters’ privileged earthly experiences, funded by the rewards of evildoing, and leaves open the question of whether Donny has been enslaved—which may leave some readers puzzled about where goodness lies.