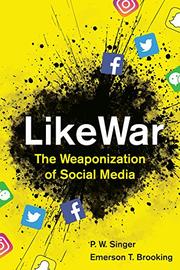 The Weaponization of Social Media

In which Facebook becomes a Clausewitz-ian continuation of war by other means.

Ever since the 2016 presidential campaign, it has dawned on many Americans that social media might just not be our friends—and certainly not the friends of democracy. As Singer (Wired for War: The Robotics Revolution and Conflict in the 21st Century, 2009) and Brooking caution, though that campaign represents a historic use of social media on the part of the Trump machine to rebrand their candidate, “it was also a globe-spanning information conflict, fought by hundreds of millions of people across dozens of social media platforms.” Those platforms are novel and not well-understood, but they are most definitely what military planners call “battlespaces.” The Islamic State group has used social media to recruit jihadis from across the world; Russia, as we are increasingly learning, has deftly used those media to influence elections; kidnappers in places like Colombia and Mexico use them to select targets, harvesting information on habits and whereabouts. Some of the text is unnecessarily obvious; few readers will not know, for instance, that the internet has grown explosively in the last generation, as the authors patiently explain. But much is novel: Singer and Brooking sagely note the intensity of interpersonal squabbling online as a moral equivalent of actual combat, and they also discuss how “humans as a species are uniquely ill-equipped to handle both the instantaneity and the immensity of information that defines the social media age.” The United States seems especially ill-suited, since in the Wild West of the internet, our libertarian tendencies have led us to resist what other nations have put in place, including public notices when external disinformation campaigns are uncovered and “legal action to limit the effect of poisonous super-spreaders.” Information literacy, by this account, becomes a “national security imperative,” one in which the U.S. is badly lagging and indeed serves as a negative example for the rest of the world.

A timely, urgent look at a world of electronic sheep—and wolves aplenty, too.