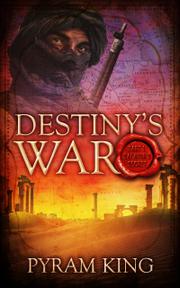 In this debut novel set in the Middle East during World War I, a reporter joins a dangerous military expedition across the Desert Sea.

Francis Marion Jäger—his friends call him Mare—is an American journalist working for a London newspaper in the Middle East, covering the Great War. While in Egypt, he makes the acquaintance of Benjamin Wright, a young British lieutenant about to embark with his battalion for Rafah. Without a new assignment, and so essentially out of work, Mare agrees to accompany him, if only reluctantly. Weary of war, the reporter is also shiftlessly unsure what else to do. He meets Brig. Gen. Clement Leslie Smith, who quickly learns Mare works as a spy for Ms. Belle, “the only commissioned woman in the theater,” and that he speaks Arabic fluently. Impressed, Smith orders Mare to join a reconnaissance mission in search of a strategically sound base of operations north of Damascus. Mare is also charged with showing the way to Masyaf, a Syrian area long rumored as cursed, the feared redoubt of Sinan, a mighty warrior who became known as a kind of god of assassins, an intriguing story rivetingly recounted by King. While in transit, Mare encounters his friend Hasan ibn Faraj, once a Bedouin prince and now a soldier and tracker. Hasan entrusts Mare with a scroll and dagger that purportedly belonged to the famed Saladin, the first sultan of Egypt and Syria, artifacts of extraordinary value that would place any possessor in grave peril. The author poignantly depicts a theater of war comparatively neglected by historians and novelists and just as grimly violent as its counterparts: “A strange land, a stranger war. Most have no idea why they are killing or even whom they are killing. Ours is a train full of soldiers lost to humanity, shell-shocked, tired, sent off to a place to kill or die.” In this first installment of a series, King draws from the actual journals of Francis Marion Jäger— beautiful, hand-drawn illustrations from them are included—and the entire tale is narrated from his first-person perspective. This gripping story vividly brings to life a Middle East transformed by the cataclysms of modernity as well as the spirit of its ancient form.

A thrilling combination of historical acuity and dramatic artfulness.