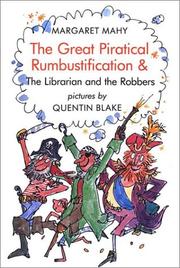 THE GREAT PIRATICAL RUMBUSTIFICATION & THE LIBRARIAN AND THE ROBBERS

The first American edition of two early (1978) stories by a New Zealand author who has since won two Carnegies. Both depend on slapstick humor and on subjects dear to British children's books for their appeal. In the first, the Terrapin's baby-sitter turns out to be a pirate who assembles a crowd of other pirates for a riotous party in which everyone gleefully joins. The second features a band of robbers who kidnap a librarian resourceful enough to enthrall them by reading them stories; later, back at the library, there is a hilarious sequence when a policeman fails to arrest the robber chief, who is shelved properly under his name (he doesn't have a library card with which to check him out). Although basically just unpretentious fun, these stories are distinguished by Mahy's precise, economical style, inspired plays on words, and astute satire. Blake's zany drawings enhance the fun.