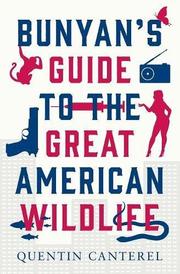 A novel follows a man and a woman in the wilderness of New York City.

The two main characters in this tale, John Bunyan and Felicity Fawkler, first meet at the Bethesda Fountain in Central Park in 2009. She’s an expat Brit of ancient lineage (she tells readers that her family “almost had a stitch in the Bayeux Tapestry”), or as John puts it, “Church of England, slender, little beanpole, waxy pallor of a holy relic, blush of a broken nose, cupid bow lips, preternatural and possibly, yes probably, possessed.” John himself is a hipster-style, fedora-wearing, struggling writer with a passion for the wilderness and a fascination with the animal dioramas at the American Museum of Natural History. John’s father is an antiquarian art dealer specializing in maps and medieval texts. Felicity becomes drawn to John immediately, despite the shadowy presence in his life of another woman, named Willow, a lonely and troubled soul whose childhood diaries readers sometimes peruse—they describe her grandfather’s friend Broady as a cryptozoologist. She hears stories of “Fearsome Critters” like the mangrove killfish, the snalygaster, and so on. (Broady asks the 9-year-old Willow: “I thought everyone knew what a Fillyloo is?”) Canterel (The Jolly Coroner, 2016) weaves together the stories of John and Felicity with a good deal of skill at handling the very elliptical nature of his narrative, which shifts viewpoint and time frame in a series of strange, surrealist moves. Through it all run two constants: the great wildlife guide John is composing and New York, a location Canterel adroitly reimagines as a sprawling wonderland in which anything is possible. “Even you, John, would agree that New York is a strange place at five in the morning,” John muses in a typical observation. “It’s almost as if the place shouldn’t exist. It is a city between two worlds.” As his slightly manic plot unfolds, Canterel deftly builds tension around John’s relationship with the enigmatic Willow, leading to long-telegraphed revelations at the book’s end.

A compellingly readable contemporary fantasia set in a vivid New York of the mind.