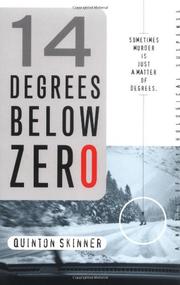 A Novel of Psychological Suspense

Psychological thriller from Skinner, a big step up from his decent debut, Amnesia Nights (2004).

The grim Minneapolis weather matches the characters’ moods in the opening teaser, which shows Lewis Ingraham striking Stephen Grant, who slides down a hillside into the frozen Mississippi. Three quarters of the story pass before we get back to that scene. Meanwhile, we learn that Stephen, a brilliant, tenure-tracked professor in cultural studies, is the lover of Lewis’s daughter Jay, a 23-year-old single mother, waitress and genius who dropped out of college when pregnant in her sophomore year. But Stephen is not the father of four-year-old Ramona, who faces up to life’s questions, mysteries and ghosts with a clear mind, strongly captured by the author. Bearing down on this likable trio is Lewis, obsessively protective of his daughter and granddaughter. He’s been severely depressed since the death six months earlier of wife Anna, a victim of pancreatic cancer. The tale and suspense run thin, but the characters and dialogue compel full attention. What plot there is concerns Stephen’s love for Jay and the workings of Lewis’s disordered mind. During his 25-year marriage he committed adultery a few times and took out his guilt on his wife. Now that Anna’s gone, he turns his full, disapproving attention to his daughter’s romance with Stephen, nine years her senior. When Lewis sneaks into one of Stephen’s classes, sits in the back row and finds that he can’t bear the charismatic lecturer’s marvels of thought, the narrative finally arrives at the opening moment of physical violence. This high point is matched by a scene in the astral plane, where Anna’s ghost and Minnesota’s Bob Dylan show up to talk things over with Stephen—the mirthlessly amusing Dylan being rendered with pricelessly apt inflections.