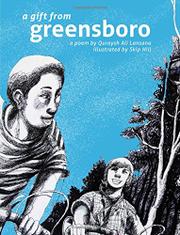 A GIFT FROM GREENSBORO

A book that gives voice to a little-known piece of history.

In this illustrated free-verse poem, the African-American speaker (and author) remembers the candy and parakeets sold at Woolworth’s, but he also recalls enjoying lunch there with his best friend, a white boy named Tod. Unbeknownst to the boys, others had fought civil rights battles at that same lunch counter only a few years prior. Lansana’s verses traverse two geographical areas—Oklahoma City, Oklahoma, and Greensboro, North Carolina—and three time periods: 1958, when Clara Luper, an Oklahoma City civil rights activist, staged a sit-in with several young NAACP member in Katz Drug Store; the mid-1970s, when desegregation closed Lansana’s school and sent him to Tod’s, where they became friends; and 1993, when the Greensboro Woolworth’s closed, later to become the International Civil Rights Center and Museum. Lansana’s erasure of geographical and temporal boundaries may confuse readers, but it emphasizes that civil rights battles happened not just in the South, but across the nation. The backmatter covers desegregation milestones that will give readers a deeper understanding of the story. Hill’s artwork alternates among black-and-white, sepia-and-white, partially covered, and full-color illustrations to draw readers’ attention to what was and what is.

A book that creatively glances backward and forward, offering hope for an America that wants to be post-racial but isn’t yet. (Picture book. 5-10)