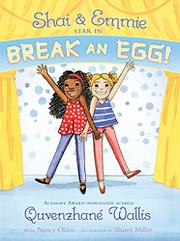 From the Shai & Emmie series, volume 1

Debut author Wallis’ series opener, with co-author Ohlin, is a short and sweet early chapter book tackling themes of jealousy and empathy among classmates at Sweet Auburn School for the Performing Arts.

African-American Shai Williams aspires to being an actress just like Grandma Rosa and Aunt MacKenzie, aka Aunt Mac-N-Cheese. She has the mutual support of her best friend and fellow Sweet Auburn student, white Emmie. When it is announced that the third-grade musical will be Once on This Island, Shai wants nothing more than to follow in Aunt Mac-N-Cheese’s footsteps in the lead role, Ti Moune—but newly relocated SoCal transplant Gabby, also African-American, is cast in the role. When Gabby struggles, teachers ask Shai to help her out. Shai is less than eager to assist but heeds her parents’ sage advice to take “the high road.” All does not go perfectly, and Gabby does not become Shai’s new best friend by the time the play opens, but the hopeful ending is refreshingly realistic and hits the right notes. As Grandma Rosa reminds us “It takes courage to be nice to people who aren’t always nice to you.”