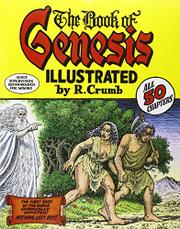 THE BOOK OF GENESIS ILLUSTRATED

The Book of Genesis as imagined by a veteran voice of underground comics.

R. Crumb’s pass at the opening chapters of the Bible isn’t nearly the act of heresy the comic artist’s reputation might suggest. In fact, the creator of Fritz the Cat and Mr. Natural is fastidiously respectful. Crumb took pains to preserve every word of Genesis—drawing from numerous source texts, but mainly Robert Alter’s translation, The Five Books of Moses (2004)—and he clearly did his homework on the clothing, shelter and landscapes that surrounded Noah, Abraham and Isaac. This dedication to faithful representation makes the book, as Crumb writes in his introduction, a “straight illustration job, with no intention to ridicule or make visual jokes.” But his efforts are in their own way irreverent, and Crumb feels no particular need to deify even the most divine characters. God Himself is not much taller than Adam and Eve, and instead of omnisciently imparting orders and judgment He stands beside them in Eden, speaking to them directly. Jacob wrestles not with an angel, as is so often depicted in paintings, but with a man who looks not much different from himself. The women are uniformly Crumbian, voluptuous Earth goddesses who are both sexualized and strong-willed. (The endnotes offer a close study of the kinds of power women wielded in Genesis.) The downside of fitting all the text in is that many pages are packed tight with small panels, and too rarely—as with the destruction of Sodom and Gomorrah—does Crumb expand his lens and treat signature events dramatically. Even the Flood is fairly restrained, though the exodus of the animals from the Ark is beautifully detailed. The author’s respect for Genesis is admirable, but it may leave readers wishing he had taken a few more chances with his interpretation, as when he draws the serpent in the Garden of Eden as a provocative half-man/half-lizard. On the whole, though, the book is largely a tribute to Crumb’s immense talents as a draftsman and stubborn adherence to the script.

An erudite and artful, though frustratingly restrained, look at Old Testament stories.