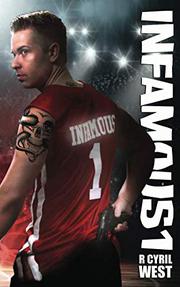 A new-adult sports novel tells the story of a young man pulled back into the dangerous world of street hoops.

Troy Blake was not necessarily cut out for commercial fishing—particularly catching king crab in the freezing and stormy waters of the Bering Sea—but at least it’s keeping him out of trouble. Only a year ago, Troy was a freshman point guard on the Arizona Southern College basketball team. He moonlighted as “The Outlaw,” the star of the one-on-one Extreme Hoops League: “A hoops spectacle that rewards aggressive, in-your-face jams, where refs rarely call fouls, and hacking, charging, and fighting are key to a baller’s arsenal.” Serving on the fishing boat fulfills his probation for accidentally killing a player in a street game gone awry, though the aggression of some of his crewmates tests his new commitment to anger management. As his probation ends, Troy is hoping to go back to school and maybe pursue a relationship with a girl he meets in Alaska. But all his plans go out the window when he gets news from Arizona that his brother, Billy, has been murdered. Getting revenge will mean rushing headlong back into his turbulent past, and this time, if he kills someone, it won’t be accidental. West’s (Some Never Forget, 2017, etc.) prose is as fast and punchy as his protagonist’s game, as here, where Troy sizes up an opponent from a more privileged background than his own: “Probably went to some private school in Scottsdale. You’d bet your momma’s food stamps and your father’s epic Metallica record collection that Socks’ mother drove him to basketball practice in her fancy Mercedes Benz and made sure he always had the latest LeBron Zooms.” The plot is fairly ridiculous—Troy never wants to fight, but people just keep forcing him to defend himself. Even so, the dual macho subcultures of commercial fishing and street basketball make for compelling milieus. The result is a novel that is highly readable even if, in the end, it’s little more than an escapist fantasy.

A melodramatic but engaging tale of resentment, redemption, and revenge.