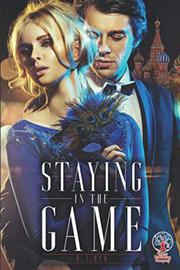 STAYING IN THE GAME

The feverish machinations undertaken by Red’s characters are certainly imaginative and even engrossing, and there are intricate scenes of tradecraft and neurolinguistic programming, which add psychological depth to some scenes. (To gain Galina’s confidence, Inga offers a long, Dostoyevskian backstory of how her narcissistic mother pushed her to become a concert pianist and then sabotaged her career.) But the supercomplex narrative may leave readers feeling like simpler expedients are available to achieve the characters’ ends or that the ends themselves do not merit so many sojourns down blind alleys. (In one bizarre scene, Galina sends her friend Olga hundreds of miles away to Baku to buy a book with a quote that Galina likes but doesn’t tell Olga which book to buy because she doesn’t remember the quote or the book’s title or author, merely the bookshop where she saw it; Olga dutifully returns with books but not the right one.) The novel’s ill-edited prose is often baffling, especially when sex is discussed. (“Galina was able to infect Paul with the poison through bleeding resulting from the deformation in the anal relationship.”) Red sticks lots of aphorisms into the text from writers as far afield as Nietzsche, Kafka, Eleanor Roosevelt, and Janis Joplin, but they seldom illuminate the novel’s themes. For example, the author quotes Einstein, saying, “You have to learn the rules of the game and then to play better than anyone,” which, if authentic, would be the most vacuous truism the physicist ever uttered. The result reads like a le Carré novel merged with Bartlett’s, as rewritten by Jerry Springer and Google translated into Russian and back. Many readers will tire of this game well before the novel stops.

An ungainly mishmash of stilted writing and inexplicable intrigues.