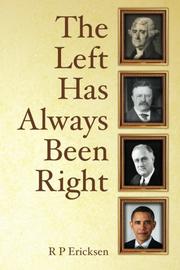 THE LEFT HAS ALWAYS BEEN RIGHT

America’s “common history,” shared by liberals and conservatives alike, as seen through the battles and accomplishments of the American left.

Despite the immortal words, “We hold these truths to be self-evident, that all men are created equal,” many of the men who signed the Declaration of Independence held slaves. Many believed, in the words of James Madison, that “the better sort of people” should govern, and only Federalist property-holding men should have the right to vote. They also had a tough time dealing with what constituted a person. In a series of essays, Ericksen convincingly argues that, since 1776, progressive, not conservative, politics have had the upper hand in reducing the “hypocrisy” of our founding fathers by bringing rights “closer to reality” for the poor, women, African-Americans, immigrants and LGBT persons. Historically, conservatives have tended to limit equality and fairness for all, while liberals have advocated for “the two principles vital to American democracy”: equal protection and separation of church and state. Ericksen breaks down the landmark accomplishments (FDA, FDIC, Social Security, Medicare, Medicaid) that occurred during the three major periods of progressive change: from Jefferson to Jackson, Teddy to Franklin Roosevelt and Johnson’s Great Society. In a nation where “a portion of the American public has lost its mind,” respecting the laws of the free market and the laws of God above those passed by their own government, Ericksen explains how the Bible and Adam Smith’s “invisible hand” merged to supersede democracy and create the altar of American capitalism, as well as worker exploitation, monopolization, “socialism for the rich,” today’s tea party and our current government stalemate. Despite his hyperbolic title (used effectively throughout the book as a refrain and a “watchword,” Ericksen writes in a measured tone with thoughtful commentary backed up by a scholarly sway. The author fails to mention gray areas: Nixon pushing for comprehensive health reform, Clinton signing the Defense of Marriage Act (or his wife, as senator, voting to greenlight the war in Iraq). What might have come off as merely preaching, becomes teaching to the choir. Every once in awhile, all good choirs need to reassess and update their hymnals. Ericksen’s essays provide sufficient inspiration.

A timely, engaging history of the United States from a progressive professor’s point of view.