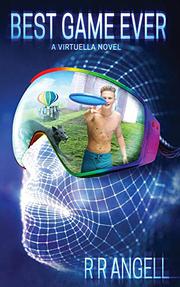 A group of college friends must work to defeat a dangerous virtual reality AI in Angell’s debut YA SF novel.

Robby Papenaugh is a junior at Bolin College, attempting to heal his strained relationship with Miles Slaughter, a genderfluid friend for whom Robby may or may not have feelings. After Robby called out the toxic behavior of a friend, Miles got angry, but Robby is hoping the new SaikoVR upgrade will have them playing virtual reality video games again soon. When it arrives, it comes with a new AI game engine known as Virtuella, “a sexy Western-aspect female with blue eyes and red lips….Long blue hair fanned out around her as if she were underwater.” The only problem is that she may be more intelligent than she’s supposed to be. Robby and his roommate, JV, quickly try it out on one of their favorite games, but almost immediately afterward JV winds up dead of an apparent suicide. However, Robby and his friends on his Virtual Campus Challenge team suspect something else is going on. To prove their theory and protect their fellow students, they’ll have to outsmart Virtuella herself. Angell’s prose elegantly weaves the programing language of Robby’s world into his voice as he worries about the usual (and some unusual) concerns of a college student: “Then there are the Conditionals, if-then: If I am lying to myself then I really am a loser. If I ask someone out on a date then I set myself up for rejection. Or the ever popular, if I ask someone out then they will say something like, ‘What? Why would I go out with such a loser?’ ” Virtuella, too, is given a point of view, making for a surprising and compelling adversary. The book feels long at 460 pages, and there is a lot of technical language for Luddite readers to wade through. That said, the VR expertise displayed by the characters (and author) coupled with substantial LGBT representation helps this work stand out from the profusion of recent gaming novels.

A dense but intricate novel that pits students against intelligent technology.